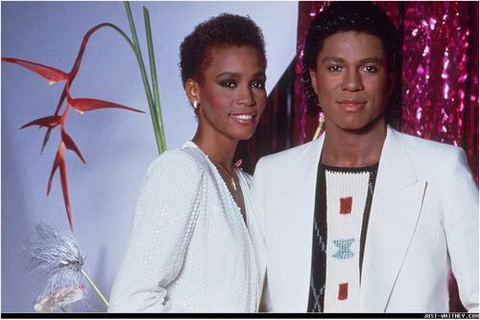 Here’s another Whitney Houston story that’s emerged: She and Michael Jackson‘s then-married brother Jermaine had an affair during the early 1980s — and he “carried a torch” for Whitney until she died.

According to the U.K.’s Sun newspaper, the pair had an instant attraction and kicked off a yearlong fling after Jermaine was brought in to produce tracks for Whitney and to perform duets together.

In fact, they went on double dates with Jermaine’s brother Jackie, and his then-girlfriend Paula Abdul. Michael Jackson was aware of the romance and disapproved of it.

“In those early days…he was smuggled into her hotel rooms, they worked extra late in the studio, and she even had a code name for him. She referred to him as ‘Ji,’ a friend of Whitney told the Sun. “The reason it ended was because Jermaine wouldn’t leave his wife —and Whitney was angry.”

But, like many singers, she channeled that anger into a song: Her 1985 hit “Saving All My Love For You” is about a woman involved with a married man.

Jermaine was so upset by Whitney’s death that he couldn’t bring himself to attend her funeral.