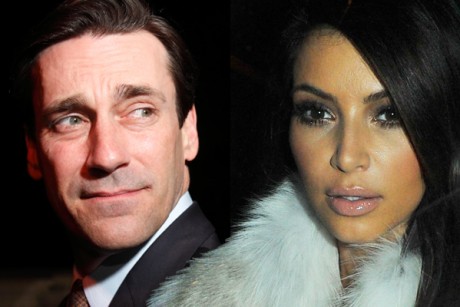 Jon Hamm isn’t apologizing for his terse words directed at Kim Kardashian in a recent Elle interview. As gossipdavid.com reported yesterday, Jon says the attack was not “personal.” Now check out the video in this E! interview:

First, Jon Hamm cited Kim Kardashian as an example of “stupidity” and being a “f—ing idiot” in a British Elle interview Then, she tweeted that his comments were “careless.”

“It’s surprising to me that it has become remotely a story,” he told E! News. “I don’t know Ms. Kardashian, I know her public persona.”

Not content saying enough, he added, “What I said was meant to be more on pervasiveness of something in our culture, not personal, but she took offense to it and that is her right.”

Is it over yet?

But he does apparently: He’s blaming society’s ills on the pair, even though the extent of Paris’ relevance and reach is definitely questionable, in a new interview with Elle magazine.

The actor said, “We’re at a place where the idea of being ‘elite’ is somehow considered a negative. Whether it’s Paris Hilton or Kim Kardashian or whoever, stupidity is certainly celebrated.”

Wow. Did he take offense to something Kim said?

And he continued, “Being a [f******] idiot is a valuable commodity in this culture because you’re rewarded significantly. And incuriousness has become cool… It’s celebrated. It doesn’t make sense to me.”

And a new feud is born: Lil’ Kim vs. Nicki Minaj.

Why? Well, when Lil’ Kim appeared on Watch What Happens Live on Wednesday, she said of Nicki’s new track “Stupid Hoe:” “If you have to make a song called ‘Stupid Hoe,’ you must be a stupid hoe,” she said.

But that’s not all: When asked what she thought of Nicki at the Grammys, specifically the dancing priests, Pope lookalike, etc. “I’m pretty sure I feel the same way everybody else feels,” Lil’ Kim said.